My first In-law Elixir was brewed for our wedding in 2014. It was an American Pale Ale extract kit from Northern Brewer (I think). I tweaked the malt bill for this recipe to get a bit more character and malt presense by adding some Munich II. Unfortunately, I ended up mashing lower than intended and the body may be lighter than planned for.

On a few taste tests during fermentation, the bitterness and hops aroma were mild, but pleasant.

This recipe was exported from BeerSmith and embedded using the BeerXML WordPress plugin. 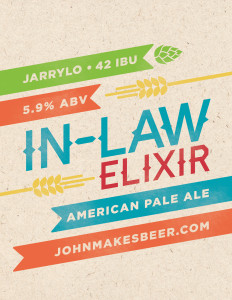